Types and Symptoms of B-cell Lymphoma 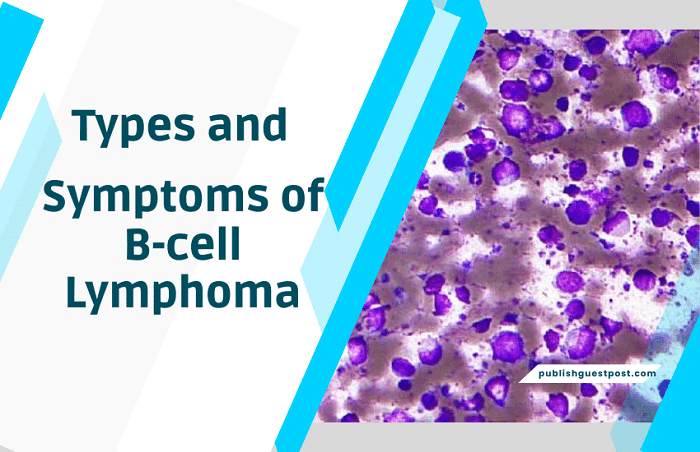 What Are the Types and Symptoms of B-Cell Lymphoma?

B-cell lymphoma cancer grows in the B cells, known as B lymphocytes, which make antibodies to fight disease-causing microbes. Most B-cell lymphomas are non-Hodgkin lymphoma (NHL).

In this post, we discuss the types and symptoms of B-cell lymphoma.

Different Types of B-Cell Lymphomas and Their Symptoms

As mentioned, B-cell lymphoma affects the B cells which are part of the immune system. There are different types that vary depending on where the cancer originates.

This variety attacks all age groups but mostly occurs in the elderly. It starts as a rapidly-growing mass inside lymph nodes in the abdomen, chest, armpit or neck. It may also begin in other parts of your body like the intestines, brain, bones or spinal cord. This tends to be an aggressive and fast-growing cancer but usually responds very well to treatment.

Follicular lymphoma appears in several lymph node sites such as the chest and abdomen. It also occurs in bone marrow but it is slow growing. Mostly elderly people suffer from this lymphoma as it rarely occurs in young people.

This lymphoma mainly affects men over 60. By the time it is detected it has already spread to your bone marrow, spleen, and lymph nodes. It is more challenging to treat than other B-cell lymphomas.

In this slow-growing B-cell lymphoma, the cancer cells are mostly seen in the blood and bone marrow, as well as the spleen and lymph nodes.

Like CLL and follicular lymphoma, this is also slow-growing. Some of these lymphomas occur in the thyroid, lungs, salivary glands, tissues surrounding the eyes, and skin.

This is a slow-growing and rare lymphoma that affects the spleen and liver. It produces an immunoglobulin or antibody known as M-protein.

In spite of the name, this cancer is often regarded as a kind of B-cell lymphoma. It is a rare lymphoma mostly suffered by men. The cells are tiny B lymphocytes with projections coming out that give them a hair-like appearance. They are seen in the blood, bone marrow, or spleen.

What Are the Symptoms of B-Cell Lymphoma?

Symptoms vary depending on the type of B-cell lymphoma, how advanced it is, and where it appears. For example, a person with lymphoma in the chest may experience chest pain, breathlessness, and coughing.

The most common sign of B-cell lymphoma is an enlarged or swollen lymph node in the groin, armpit, or neck. These inflamed lymph nodes are generally painless. However, they may create pressure on surrounding organs or tissues and cause pain and discomfort.

Other common symptoms are unexplained tiredness, a rash, or itchy skin on the back, stomach, or chest.

Some signs of this lymphoma are generalized which means they can affect your entire body. (They are called systemic or ‘B’ symptoms.) These include drenching night sweats, an unexplained high fever that won’t go away, and unexplained weight loss.

A cancer diagnosis is a matter of concern, but most B-cell lymphomas respond well to treatment. Early detection and treatment can bring excellent results, even in those with an aggressive cancer. Never delay seeing a doctor about an inflamed lymph node or any other above-mentioned cancer symptoms. Consult healthcare professionals, caregivers, or support groups to learn more about this serious disease and how to deal with it.